Hail Damaged Aluminum Windows in Texas - How the Insurance Company will Evaluate the Window Damage.

Hail damage to the windows, should you get glass replacement or full window replacement and what does insurance pay for?

Also tips if you're next to see hail damage to the windows on your home.

Also, how to maximize the insurance payment towards new replacement windows.

Eighty percent of Wylie homes have damage from the April hailstorms.  Entire streets are boarded up and subdivisions ruined.  Because I'm a window guy, I'm going to share what I know and what I think you should know about the damage to your windows.

It's going to cost between $250 and $550 to actually replace or repair a window with really bad hail damage.  From what I can see insurance offers up about half of what they should, and advises you to get quotes and file a supplemental claim for additional costs. 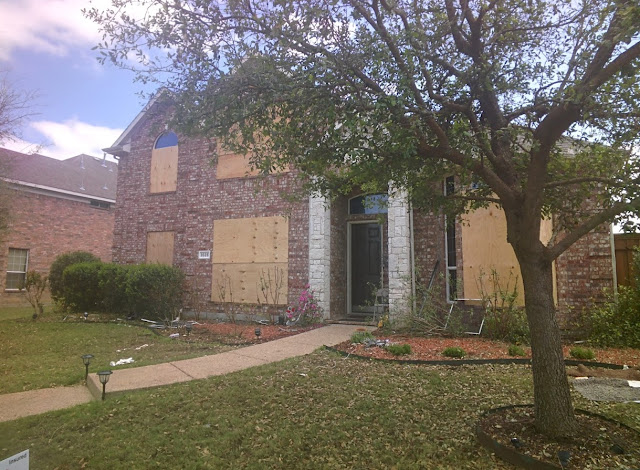 I think this is done to slow down process and actually get off cheaper.  If you take the money and get upgraded windows you never notice in many cases.  When they offer you $28 or $32 to replace the cracked vinyl stripping around the insulated glass, they don't mention that often that stop is not replaceable because the glass has settled down on top of it and it can't be removed without breaking the glass. 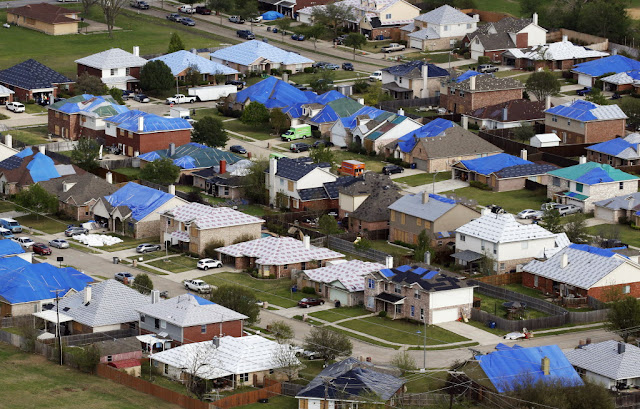 Some "repairs" I've seen involved cutting it close with a utility knife and glueing a new piece over the glass trying to leave that old piece of the vinyl.  It's a pretty cheesy way to "fix" something.  The alternative can break the glass.  This is why even moderate damage to the vinyl stops needs to pay about $300 per window.  That's about $150 per glass lite.  Some folks may be cheaper.  I am not.  I don't think you should settle for less as this is about half of what you need to replace the window entirely with something that has a lifetime warranty, Low E Glass and Argon as well as other great upgrades.

Glass replacement is common.  A glass company is who does the job if it's glass only.  I refer the work to associates whom I trust.  The big ones and the circles are tricky to get right. 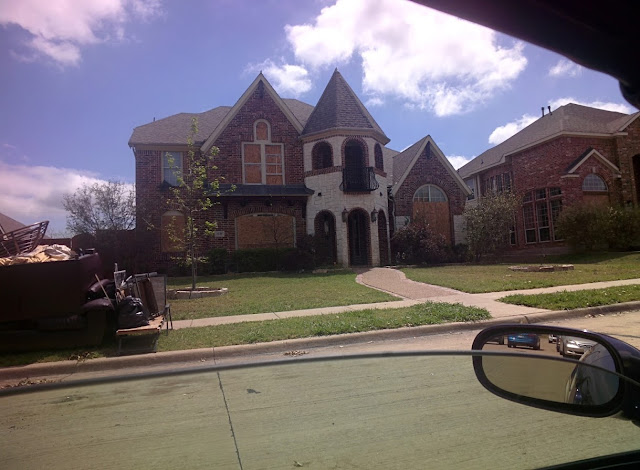 To contrast that.  If the frame is damaged, the $300 is really ineffective.  Also, it's like putting new tires on your worn out 1972 Ford Pinto.  You have new tires....   your car still sucks.    This does nothing for the energy ratings of the window, the seal of the weatherstripping or the squareness issues that may have arisen over time that cause leakage.

An average home has the equivalent of a two foot by two foot hole in the side of their house from leakage in a house full of builders grade type windows. 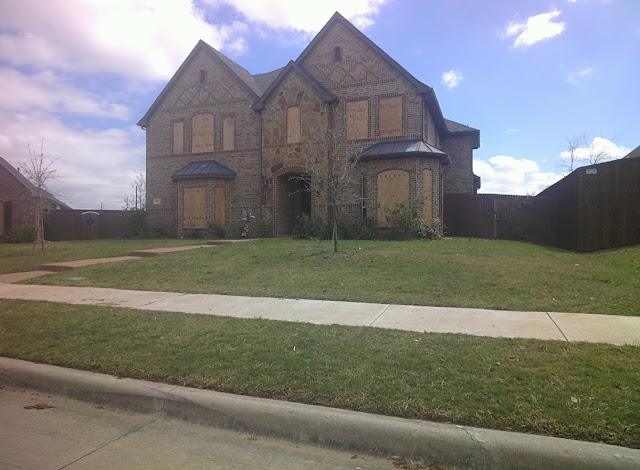 This isn't sales pitch though.  You knew that the old windows sucked.  I'm just reminding you while you research what will happen with builders grade aluminum windows that don't meet Energy Code anymore, homeowners insurance claims associated with hail damage, general contractors and how they deal with window vendors, installers or installation contractors.

Older aluminum builders grade windows can't usually be duplicated exactly either.  The ones in these Paul Taylor homes in Wylie are from HR windows which was bought out by Atrium.  They are always a little different overall ten years later specifically so they don't match.  The new windows will be mismatched unless you throw a fit with the adjuster and insist they replace them all so they match.  Good luck with that, let me know how it goes.

To replace old builders grade aluminum or vinyl double paned windows in a retrofit application will always run at least $450 per window and often $500 or $550 and up with really tall windows or windows with archtops or half circles over them. 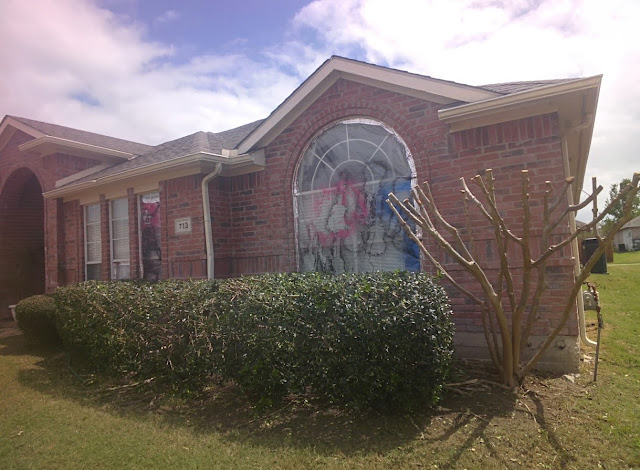 Sorry John and Mary, that is indeed three windows in one opening.  Even on the cheap we're looking at $1600 bucks right there in that bedroom.  Really great ones $2200.  What are the insurance adjusters going to say?   $600 to $800 tops.

I was at a house today and the insurance offered $242 per window.  I charge $150 in labor.  It will be a really terrible window, and bad sealant if I spend $92 on both of them.

Also a twin window with a half circle is actually three windows not one.  Don't think you're getting off that easy.  It never goes like that.

Now to what I do.  I pull out the builders grade metal window and put in a lifetime warranty window with high performance heat reflective glass and so on that is roughly FOUR times more energy efficient than the old ones.....   that God apparently beat out of your house with a hail storm.

The cost on those is about $550 and up to about $800 on really big ones or archtop windows that are eight or seven feet tall or tempered.  As a point of reference, windows range in cost from $450 to $2000 each installed depending on the vendor.  My site has more about the cost of windows as it relates to replacement windows. 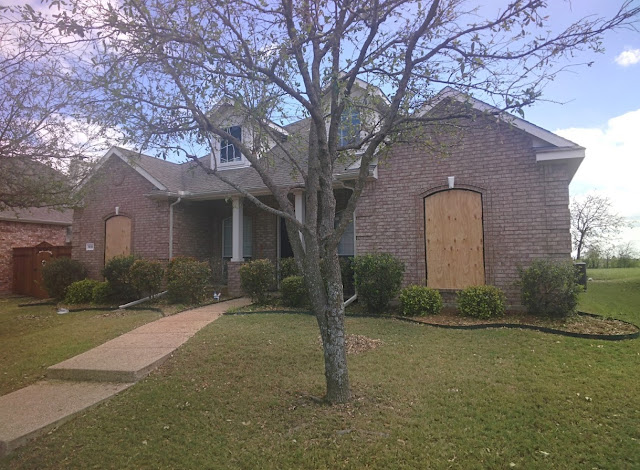 This is really about you not getting shorted on hail damage and the insurance settlement.  The supplimentals are where the contractor often finds a premium, and when he says he's going to cover your deductable....  that money comes from somewhere.  Guess where.

Long story ....   long.   However much the insurance is offering is probably not enough and you should look closely at the adjusters printout.  If you need window input specifically you can send me an email with pictures or other details and I'll tell you if it all looks correct.

If it's not I can help you find the best course of action even if it's not window replacement.  The truth is I think if I help you out now....   you'll remember later and tell someone.  I'll get my rewards later, for now let's get the house fixed. 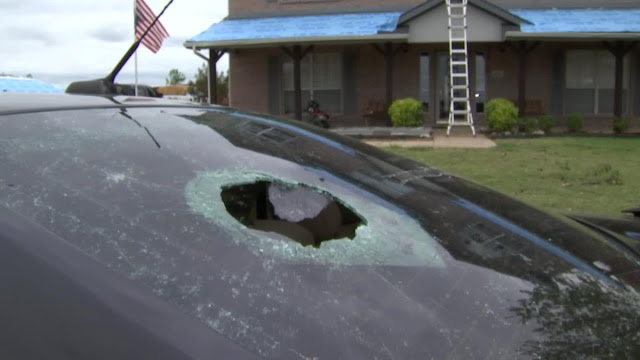 Also....    Windows take a couple of weeks to produce as opposed to glass which can be done in a few days.  If the window frames are trashed, get new ones on order asap as it's not something that's sitting on a rack at the Home Depot waiting on you to show up and buy it.

No one is bringing you windows faster than two weeks and good ones are four to six weeks in some cases.  Waiting is not a great plan as then hundreds of windows are in line in front of you as well.

Windows are one area of the storm damage where faster can be better for sure.

Tips for after the hail damage to your homes windows when it's time to do the board up after the glass is smashed out.


Okay this may be controversial.....   Use plywood and screw it to the frame.  Ruin that frame real good securing the house so they have to replace the frame and the glass instead of just glass.

Let's just stop that variable from the get go.  Then use foam  or tape or both to seal the edges so you and your family aren't sitting in front of a window that leaks like it's open with wind blowing around it.  Do that from the inside and keep it on the frame and the wood.  Don't make a huge mess on the brick.  That's just dumb.

Or you could do what would be cheaper for the insurance company and use cardboard and tape....   not.    Hey.  Get comfortable, this fix isn't going to be fast.  You may as well get it really boarded up well and as airtight as possible.  Screwing up the frames will also make it a little different on the insurance pay out.    Keep in mind that if you screw to the trim around the window, that needs to be replaced or painted or both as well.

Questions?   Send me a note.  I'll do my best.  Or post them here.  Share this with your friends if it seems helpful at all.  I do so appreciate your reading so much.  As I often say.... That's 15 minutes you're never getting back!